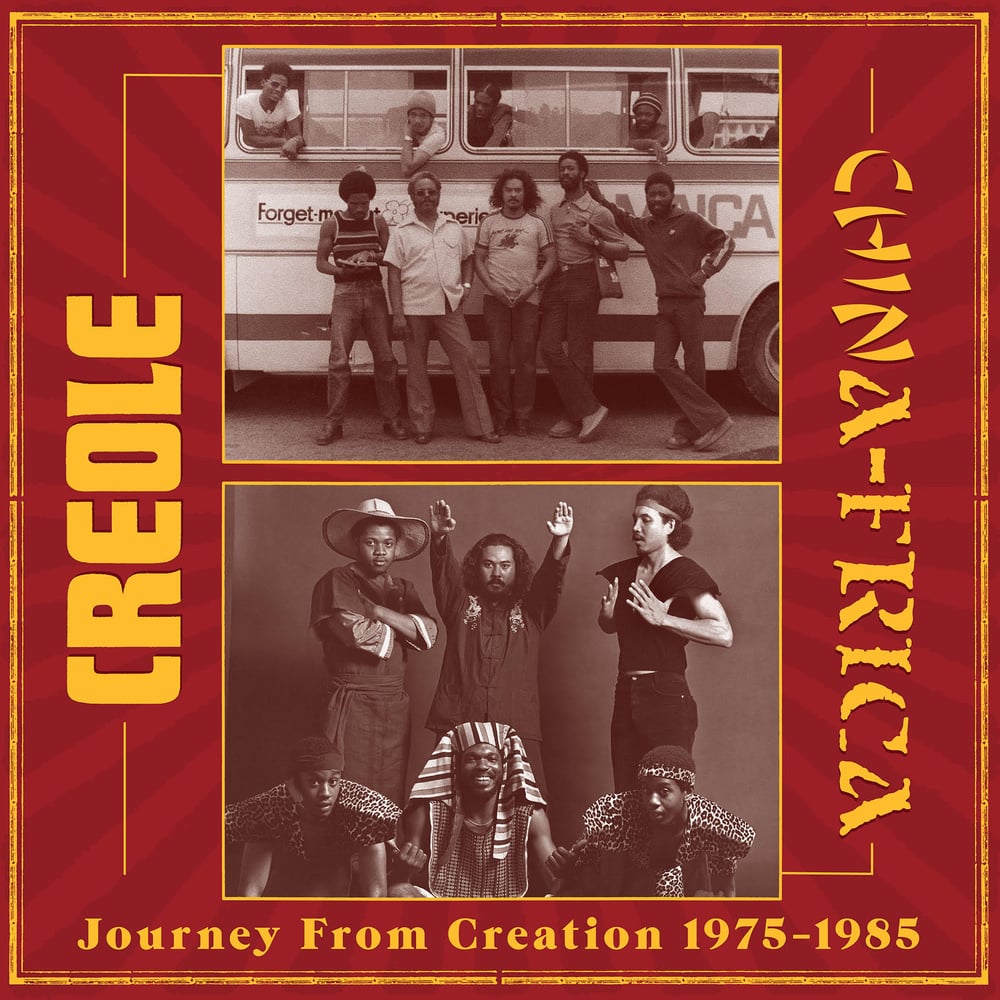 Creole / Chinafrica - Journey From Creation 2LP (China-frica)
24 track double LP in gatefold jacket. LP1 is vocals, LP2 is dubs/versions.
LP1 features one previously unreleased track. Jacket features extensive liner notes and many never before seen photos and flyers of both groups. Some tracks are reissued from the master tapes for the first time.

A lot to say about this release, here goes -

As a personal project more than anything else, DKR naturally began with a very small ‘bucket list’, a handful of release ideas, most accurately described as misty ‘what ifs’ calling from the bottom of the endless well that is Jamaican music. A trio of these ideas were centered around artists that I thought should have had albums, but didn’t. I wanted to know why they never did, and then, I wanted to make those albums. Inherent to this pursuit was the hope that in doing so, along the way I might learn about them and find some more, unheard music from these artists.

Needless to say, Creole and Chinafrica was one of these. Since you’re reading this now, you know this hope was not in vain. Creole has both a mythic and misty status among serious roots reggae heads. We know their legendary tracks, the dubplates they spawned and the cover versions that came later. But who is Creole? Who is Wayne Chin? Is Wayne Chin Creole? Is it one guy? A group? Something else? Digging into Creole's handful of lesser known records didn't reveal much more, but only raised a few more questions. I thought about these things a bunch, and by the time I learned about Wayne's next project, Chinafrica, I started to put the pieces together. But ideas, wish lists and ambitions always come easier than the doing. So it took me quite a long time but finally I came around to wanting to try and answer all the questions, and in doing so, make this project a reality.

What I found in doing this was that both Creole AND Chinafrica were complete bands, in the way of a rock band rather than in the way "bands" are more often loosely conceived, credited and ever shifting in Jamaican music. Further, I found that both groups, spear headed by writer and lead vocalist Wayne Chin, were driven by his idea of bringing a reggae group beyond the aesthetic confines of the genre and toward the epic visual & theatrical aspects of soul groups like Earth, Wind and Fire and even hard rock bands like Kiss. Likewise, the music of both of Wayne's groups would also take influence from these other styles. Further, and maybe most surprising to learn was that Creole and Chinafrica both had members who went on to become well known players and producers in reggae, while their earlier work in these groups was widely unknown.

So to bring all of this, and more so their fantastic music to new light, we put together this 2LP collecting the vocals & dubs of nearly all of Creole's output and likewise nearly all of the music of the first iteration of Chinafrica (see our 12" single releases from both groups for the rest). For the record, Chinafrica went on to make some more great music in the 1990's, which is not included here. Also, we went deep into the band members' archives to dig out as many photos and flyers as we could for the jacket, accompanied by a detailed rundown of their histories and musical output. Creole and Chinafrica each created a small but fantastic body of music that does a rare thing. Much of the music on this album successfully blends elements of different genres of music in an interesting way. It's firmly planted in reggae, but straddles the borders of soul, funk and rock in brilliant, complimentary moves. I dare say in Jamaican music, you will be hard pressed to find an easy comparison to the music of these two groups.

Please enjoy this collection of Wayne Chin and the guys’ unique and uncompromising vision of reggae music, much as we have enjoyed realizing it and shining a long overdue spotlight on their history and creativity. A sincere thanks to Wayne Chin and all the members of Creole and Chinafrica who indulged me and enthusiastically took part in one of my dream projects, it's a honor to finally present this release.
-RB/DKR

The players below will play samples of each of the four sides of the album. Click thru to Soundcloud to choose individual tracks. See below the players for samples of tracks that unfortunately can't be hosted on Soundcloud.

Click here to listen to a sample of 'Jah Creation'

Click here to listen to a sample of 'Jah Creation DUB'

Click here to listen to a sample of 'Beware'

Click here to listen to a sample of 'Beware DUB'