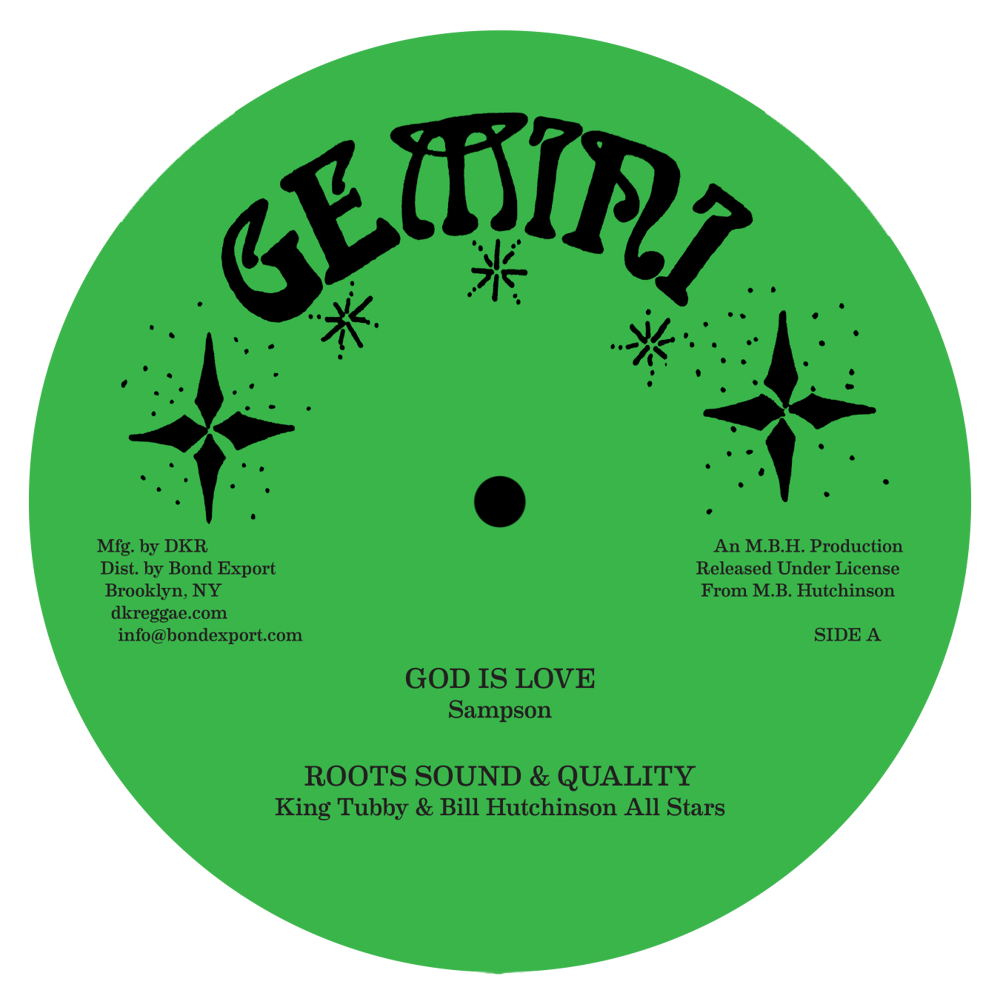 At long last, in proper quality and officially licensed, we present a pair of records long worked at, historically important, largely unheard, and most of all, musically brilliant. Above all, the dub mixes on these records are known among connoisseurs as being among a handful which can not only be considered a definitive King Tubby's style statement, but also among the most radical, transformative and forward thinking mixes ever committed to tape by the King himself. This is proper King Tubby's music; Tubby the man, not just Tubby's the studio.
These two 12"s represent most of the known cuts of this brilliant rhythm, played by the Wailers' Barrett brothers, alongside Earl Chinna Smith, Augustus Pablo and Gladdy Anderson, all together truly a rhythmic force to be reckoned with. "Message from the Congo" and "God Is Love" are two vocals cuts produced via the mid 1970's partnership of Milton "Billy Hutch" Hutchinson and the late Linton "Bob Soul" Williamson. Together these upstart artist-producers operated from a base of operations on King St. in downtown Kingston, nothing short of a historic location that was both concurrent with and adjacent to both the Wailers own record shop and Channel 1's first pressing plant.
With the Barrett brothers at the helm of the session, the rhythm was laid at Randy's studio with Errol Thompson as engineeer, then brought to Tubby for voicing and mixing. "Message from the Congo" finds Bob Soul & The United Stars chanting a message of rastafari over the propulsive uptempo rhythm driven by the late Carly Barrett's masterful drumming. The harmonizers in the "United Stars" as they are dubbed on this record, were actually members of both the Righteous Flames and Rocking Horses vocal groups. The dub mix, "Congo Dread Chapter 1", is actually worthy of the type of genre cross-referencing hyperbole I normally decry in music writing. In hindsight we find in this track, Tubby prefiguring not only the remix and the 'edit', but also the frantic yet orchestrated chaos of a lot of the complex electronic dance music that would begin to come into its own a full decade later. To try and describe the magic herein would be pointless, you must simply listen to Tubby deconstruct and reconstruct the rhythm using a melange of his now famous tools and techniques to devastating effect. Indeed, it is tracks like this one which made the man himself and those very techniques now so famous. These two tracks were originally released in Jamaica on both the Gemini and Danger Zone labels (in identical mixes). On the flip side of this first 12" we find Billy Hutch's little known vocal on the rhythm, entitled "Ten Long Years." The soulful vocal finds Bill in top form, and this track was originally released on Bill's very first album "Reggae Showcase", released only in NYC and extremely tough to track down. Rounding out the 12" is a real treat, a previously unreleased different take of "Message from the Congo", with different harmonies, and a background voice telling you "this is a message…", bringing the title of the song sharply into focus.
On the second 12", we find "God Is Love" and its dub version titled "Roots Sound and Quality" on the A-side. Credited to a "Sampson", it's unclear whether the vocalist is Bob Soul himself, though that seems to be the consensus. A moody vocal with a message of love and unity sits atop a wild bongo-driven mix of the rhythm, crafted again by Tubbs himself. The dub version brings us into poly-rhythmic hyperspace, and Tubby lets the drums do the talking. Lastly, the B-side of this 12" features "Drums of Love", a wild *stereo* discomix of "God is Love" (the A-side is mono as on the original JA 45), where the dub runs first, with the bongos bouncing left to right and back again until the tune goes clattering back into the vocal part. This track originally appeared on the nearly non-existent and infamous "Roots" compilation released only in Canada. To close out the side we have "Raw Horn of the Congo", yet another mix found on tape, previously unreleased, a dub/instru cut which brings more prominence to the horns. All together these 8 tracks paint a towering portrait of roots reggae in 1975; Tubby at the height of his powers, the magic of some of Jamacia's all-time greatest players together laying a rhythm of immense power, and a couple of true grass roots artist-producers cobbling it all together to make their voices heard on vinyl. Enough long talking, we hope you enjoy these as much as we do.