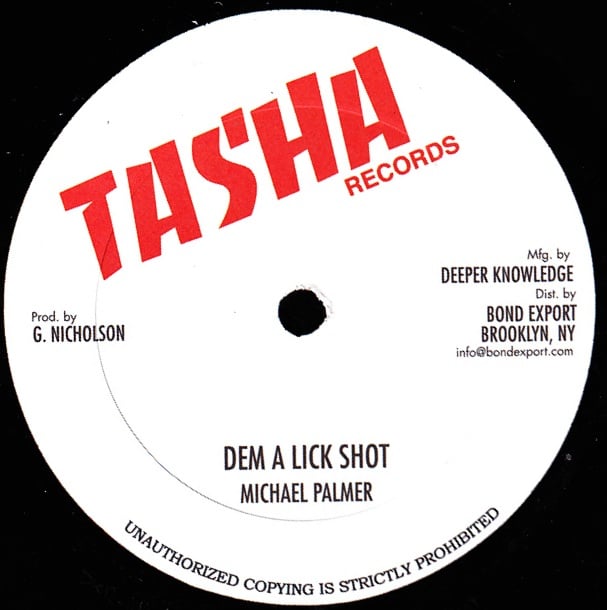 Our long awaited fourth round of releases from the Tasha label features maybe their biggest and baddest rhythm! Michael Palmer's "Dem a Lick Shot" was cut in April 1984, and is the ORIGINAL cut of the tune later re-done for the Powerhouse label. One of the baddest rhythms of the much-revered-by-us mid '80s period of the Channel 1 sound, it's monstrously slow and heavy, laid by a then current iteration of the Gladiators Band, which featured Barnabas on drums. This tune is also recalled by some to be the first voiced & released tune by Michael Palmer, aka "Palmer Dog" as he was originally and locally known at the time. "Dem a Lick Shot" was originally released on 7-inch in JA on the Tasha label, and on 12-inch in Canada on the W&B label, in slightly different mixes. It's reissued here equipped with dub, the mix being the same as issued on the 12-inch, with nuff 'lick shot' effects! This is backed with the second cut of the rhythm, by Steve Knight, "See Dem a Come." While this tune was issued on Steve's fantastic "Orphan Child" LP a few years after being voiced, it was originally intended to be released as a 10-inch single in NYC on Channel 1's Hitbound label. However, that release never happened, and so finally released now are the vocal and dub mixes as intended for that release. The vocal mix is different to that of the LP, and the dub is previously unreleased.